The 3D Laser Target is roughly the size and shape of a 19 oz. or medium-sized can of soup (540 grams).  The position of where a laser shot hits the target is sensed regardless of which direction the shot comes from.  Shots hitting the front, the back or the sides of the target are all sensed without moving the target around. The smart light turns red if the 3D Laser Target is hit in the center and blue if it is hit anywhere else.  The center of the target is an elliptical area roughly the size of a silver dollar coin.  It is midway between the top and bottom, and midway between each side of the target. 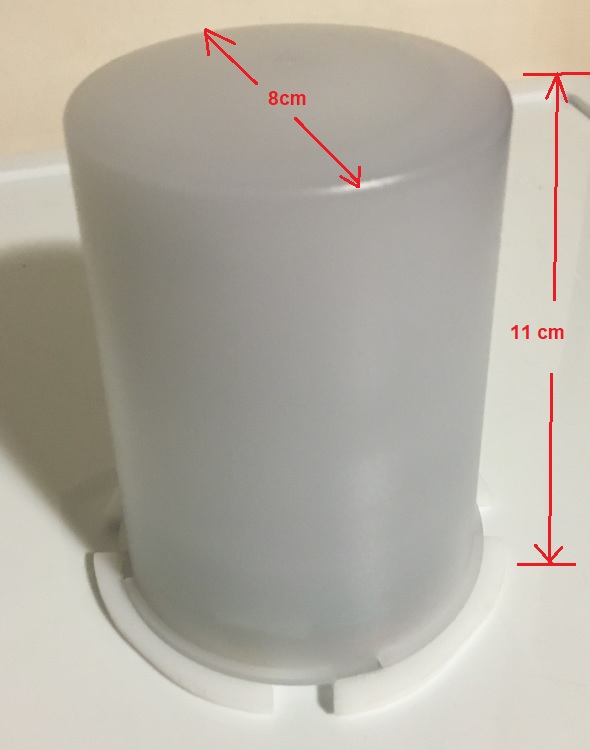 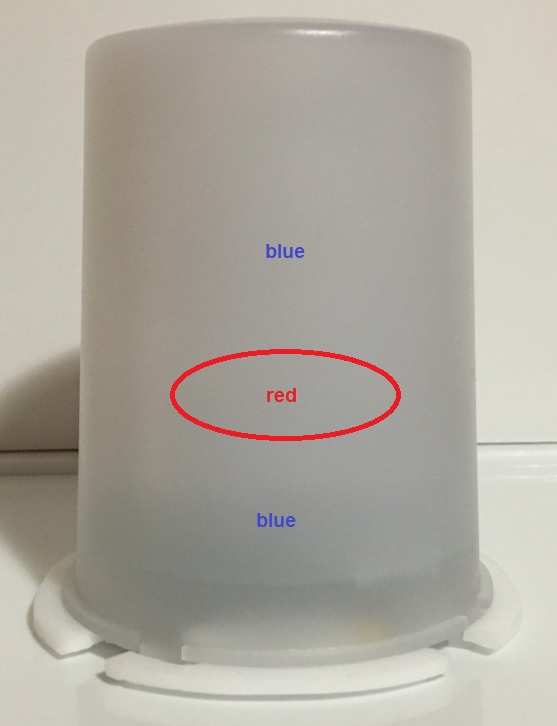 The center of the target changes position depending on the direction you are shooting from.  As if you are shooting at a real soup can out in the open.  This is always the case whether the target is moving, or you are moving, or both you and the target are moving at the same time.   This is a unique capability based on our patented technology.  No other target can do this as simply and cost-effectively as the 3D Laser Target. 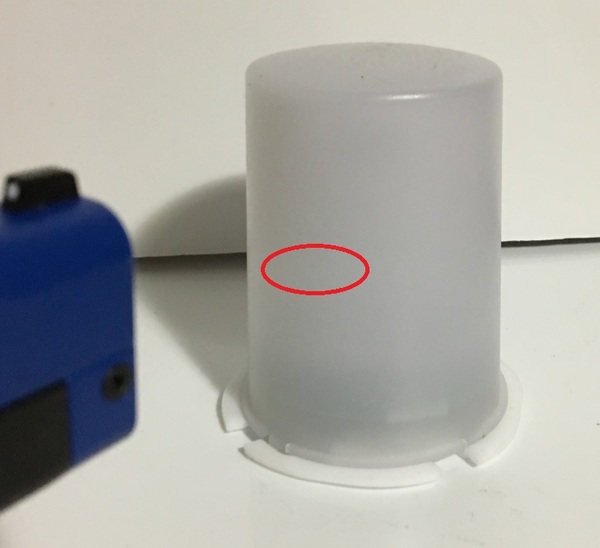 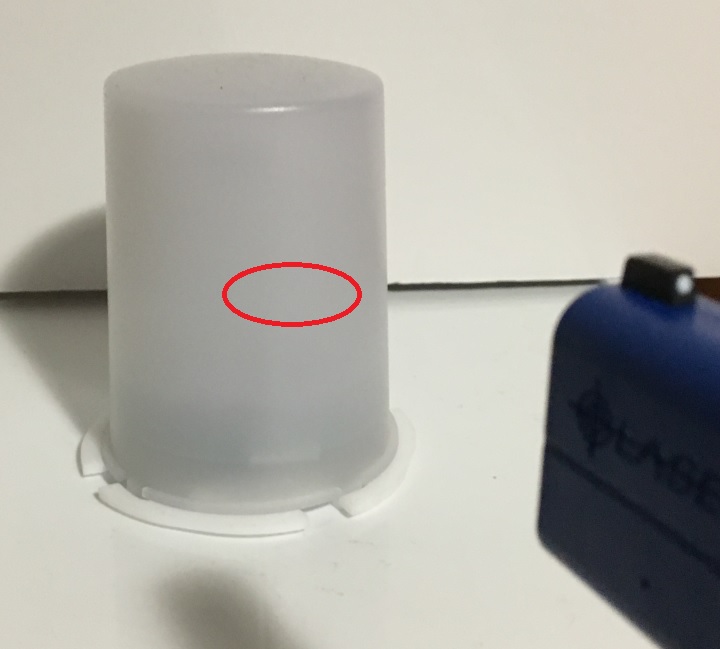 The 3D Laser Target provides instant visual and auditory feedback when it is hit. The smart light stays on for a split second, long enough for you to see the color.  It also beeps when it is hit.  It has a flat bottom and is lightweight, it weighs about 3.5 oz. (100 grams).  It can be placed on a moving item such as a robotic vacuum cleaner or a remote-controlled toy car.  Adhesives can be used to secure the target to the moving item, such as double-sided scotch tape or adhesive putty, or even Velcro.  The 3D Laser Target will also have a hook making it possible to hang the target from the ceiling or elsewhere.  The target could then be manually swung back and forth, or hung from a blade of a slow-moving fan.

We have also developed the Laser Target Mover, a device that is placed on a table or on the floor.  It moves the 3D Laser Target around in a circle.  The width (diameter) of the circle can be adjusted to be between 19 and 35 inches (48-88 cm). The 3D Laser Target can be set to move in a smooth manner around the circle, or erratically to increase the shooting challenge. 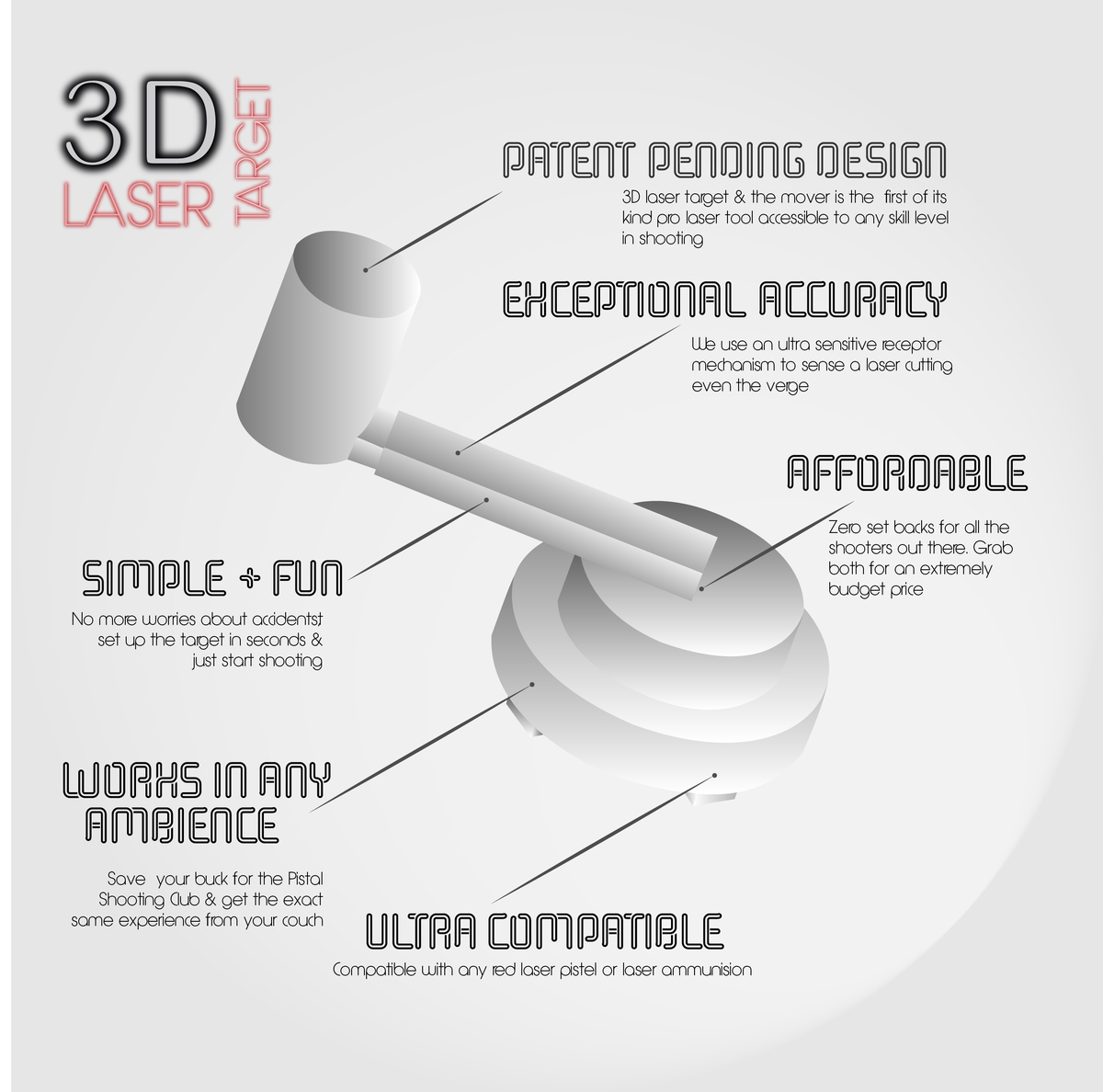 The 3D Laser Target and the Laser Target Mover each require 3 AA (double-A) batteries.  Each device is manually turned on and off.  However, if the 3D Laser Target is accidentally left on, it will conserve power by automatically going into a power-saving or sleep mode after 5 minutes of not being hit.  If a laser shot hits the target while in sleep mode the target will automatically turn on again.  The batteries enable several hours of shooting. There is no other target like this available at such an affordable price.

These days most modern guns will tolerate almost limitless dry-fire.  With dry-fire, you can practice proper grip, stance, trigger control, sight picture, and sight alignment.  As well as practice shooting from the hip, instinctive (point) shooting.  But without feedback, dry-fire practice can get boring pretty quickly.  Which is why so many people practice with flat or 2D laser sensing targets. The 3D Laser Target can be used for the same purposes that a 2D laser sensing target is used for. However, the 3D Laser Target makes it possible to take dry-fire training to the next level.  It makes it possible to practice strategies involving movement that are impossible to practice with a 2D target.  Because with movement, you aren’t necessarily ending up in front of the target when you take your shot.

There are no projectiles or shot ricochets to worry about with the 3D Laser Target.  You can set up a training environment wherever you’re permitted to shoot with a laser training pistol or with a laser training cartridge loaded in a real firearm.  You can train at home, at the office, at the cottage or even in a hotel room while you’re watching TV.  The 3D Laser Target is simple to use.  It doesn’t require furniture to be moved around or require any additional equipment, such as a projector, laptop or camera.  Your self-defense training can even be made more effective because you are practicing in the environment you may find yourself in.  When defending yourself and, or your loved ones.

With the 3D Laser Target, you can train whenever you can squeeze in a few minutes into your busy schedule. This increases the chances that you will practice with dry-fire to maintain your skills.   That you will practice that 5 to 10 minutes a day, at least 3 times a week, as recommended by most professional firearm trainers.  To add to the benefits, the 3D Laser Target makes it possible to train when it’s raining or too hot or too cold to practice outside.

Dry-fire practice with the 3D Laser Target is a wonderful way to develop and maintain muscle memory.  To repeat a movement the countless times that are necessary to learn the movement so well that it becomes second nature.  This may be dozens, even hundreds of repetitions.  You can use The 3D Laser Target to develop your instinct that will kick in when you are in a stressful situation.  When you need the shooting skills that have become second nature most of all.

I have secured the patent for the technology used by the 3D Laser Target.  I have implemented a working prototype of the product.  I now need a minimum of $15K worth of sales to justify the first production run. The orders must include a minimum sale of 300 3D Laser Targets.  Once this amount is reached, the products will be delivered within three months.

For Customer Support or more information on this campaign please contact Laser Stuff Inc. at:

A raffle ticket, the raffle will be held at the end of the campaign, the prize will be a package of three 3D Laser Targets. A winner is guaranteed.